This post is written in response to some of the questions people asked me about Thai typestyles last week at ATypI in Barcelona. Here I’m exploring looped and loopless styles by analysing current typographic practices in the Thai press. 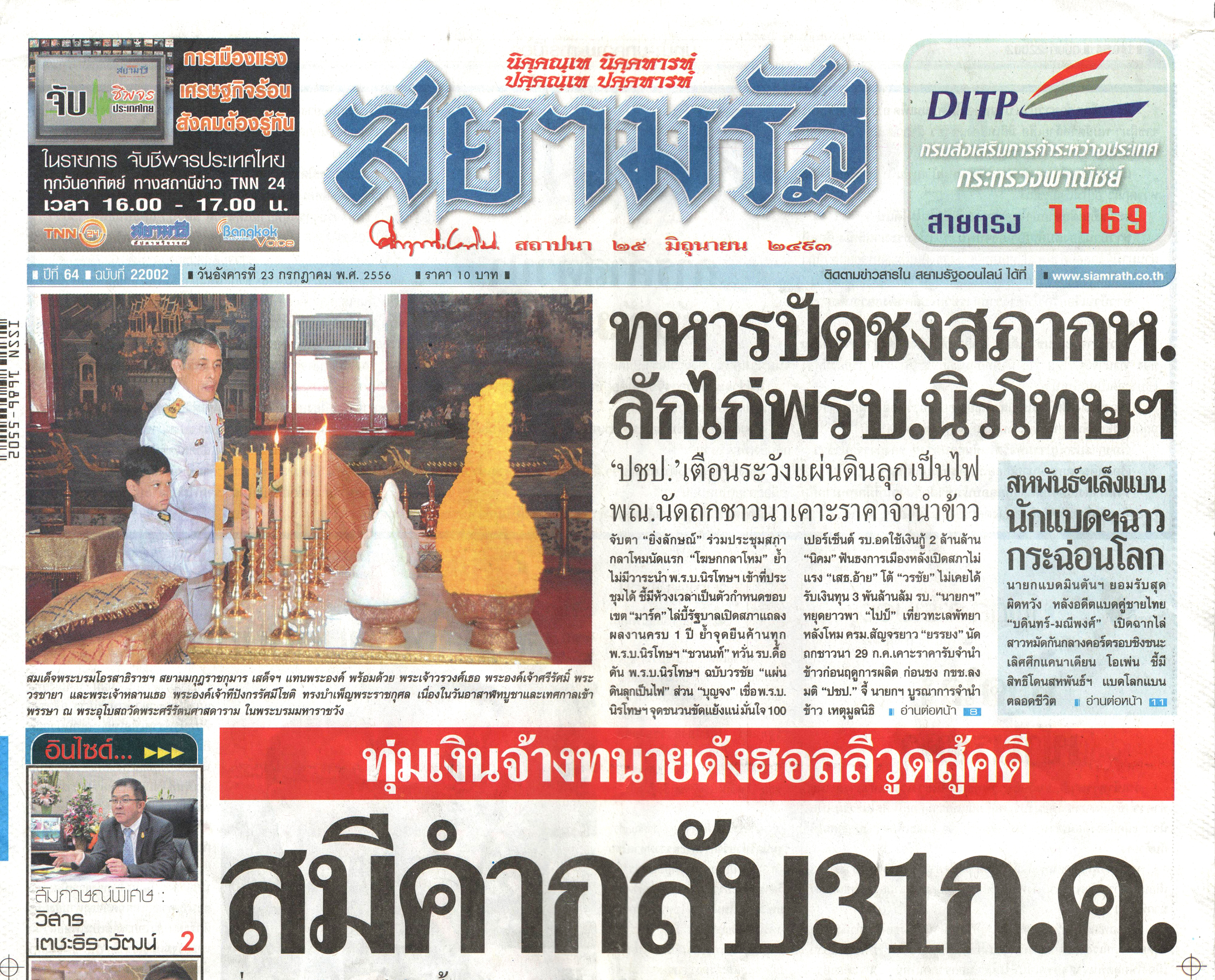 Here’s our first example, from Siam Rath (สยามรัฐ) newspaper. At first glance, it doesn’t look too awful, but when we look a bit closer, the typography is pretty dire: we see no less than eight unrelated typefaces used for different content (not including style variants like bold and italic, and not including adverts). Further contributing to the unsettled feel, text is not aligned on a baseline grid and jumps around between columns.

The absence of a condensed style for headlines means the bold letters (is it PSL Sri Siam?) are crammed together without enough breathing room. This bold and its regular (shown in the subhead) have stylistic inconsistencies in the treatment of the loops, sometimes continuous with the stems and sometimes popping out. These have likely been drawn this way intentionally to allow closer letterfitting, but what’s really needed is a condensed cut and better spacing. The use of white text on the red background seems to be trying to make up for a lack of typestyles, and the low-flying mai tho (◌้) on the penultimate syllable is a problem.

Bold is used for the first paragraphs of body text, but as there’s no room for further text on this page, the regular weight does not appear here. Photos are captioned in the bold italic at a slightly smaller size. All this bold creates a noisy, clamourous tone: by emphasising everything, nothing stands out, and the reader’s eye can’t settle anywhere comfortably. The typeface in question, PSL Text, has only two weights, and the bold is a bit too dark. With the complex lettershapes of Thai, the inkspread on newsprint, and the smallish text size, the countershapes are getting rather clogged, apertures are closing over and details are hard to see.

A further six unrelated typefaces are used: two looped styles in the masthead’s red bits of text; and three loopless styles, one in the blue strip between masthead and first article; one in the contents sidebar (bottom left); a modulated style for the heading in the pale blue inset box (right-hand column); and another one for the ‘read more’ at the end of each story. Below the fold (not shown), body text in one story is typeset a couple of point sizes larger, adding to the overall untidiness.

Given the unskilled, unprincipled, indiscriminate typography in Thai Rath, it seems best not to draw any conclusions about the more general use of loopless styles, other than to say they can be used for snatches of subordinate text.

Two even worse examples of this slapdash layout style, with text and images plonked randomly on the page and crammed into every available corner, can be seen in Khom Chad Leuk (คมชัดลึก) newspaper: here are scans of the front page and the entertainment supplement, which have so little in common they look as though they come from different newspapers. 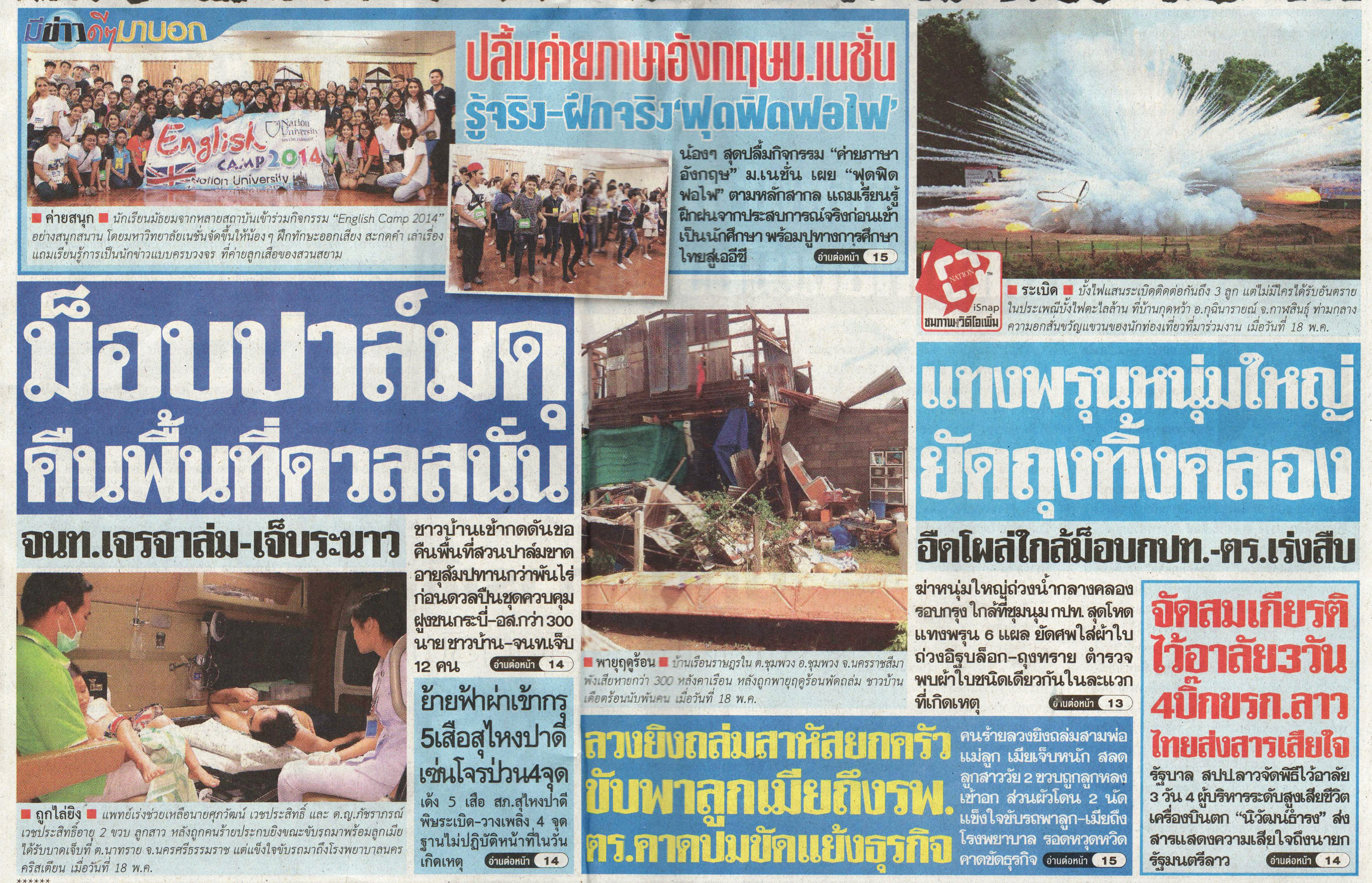 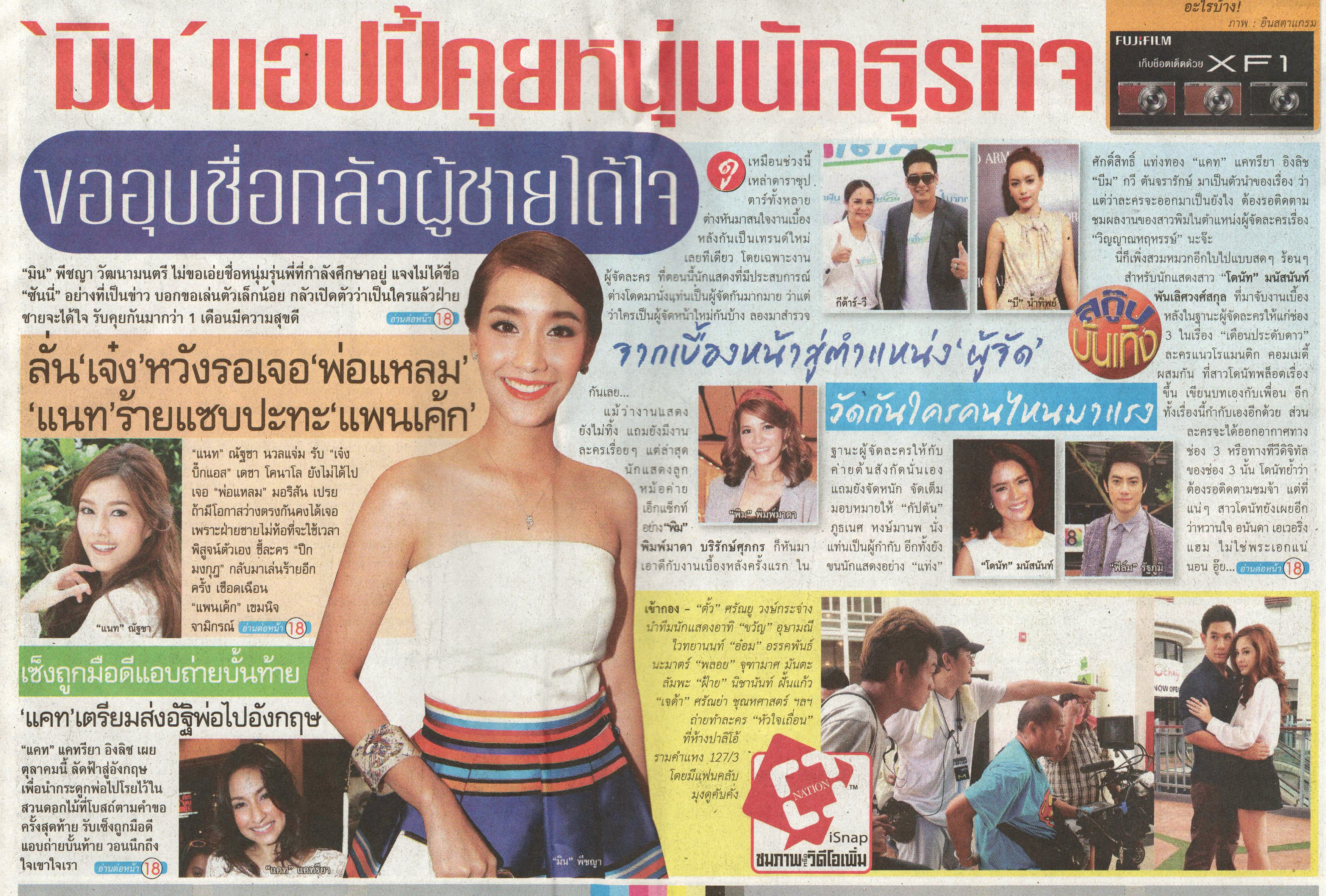 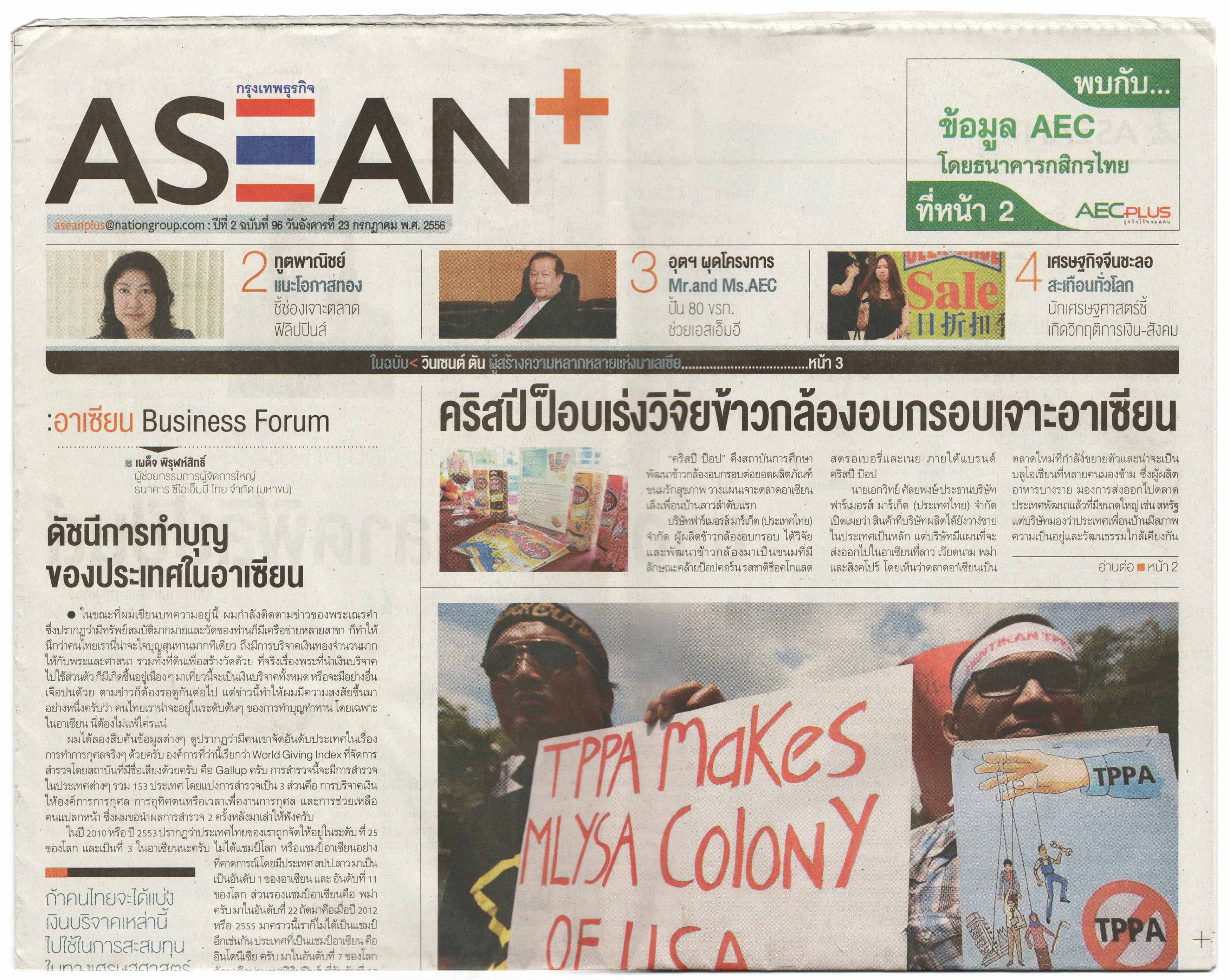 This ASEAN supplement to the Bangkok Business (กรุงเทพธุรกิจ) newspaper is cleaner. White space has been designed into the layout, avoiding the problem of overcrowding and letting the headlines breathe. Two typefaces are used, with a few weights of each indicating the hierarchy. Text is set in the standard light weight of the monolinear DB Thai Text, making text less intense to read, improving the small details of the typeforms and communicating in a more sober way.

Notice the way the loopless Helvethaica (ugh, the name!) is used for headlines and any other snippets of text that are not part of the stories, such as the contents and block quotes. The use of a condensed typeface for the headings avoids the problems of crashing letters we saw above, though the tall consonant ป needs alternate versions of floating marks. The typeface itself is a good match for Helvetica condensed: it’s clean but unremarkable, lacking personality and a bit blocky. Some letters are a little dubious (the shape of ข, the width of จ, the shape of the tail of ฐ, the counters of bold ด and ต) but there are no serious complaints to be made.

The three newspapers above illustrate a universal trend in everyday typography to favour the light, monolinear style for text. This is likely a legacy of Monotype’s Thai design (example pattern drawing here), which would have had a huge impact on the standardisation of typography due to the ease of typesetting mechanically. But although these typefaces are identical in style (looped, light, monolinear) they exhibit differences in form (shape, proportion, width). I’ve chosen the letter จ (jo jaan) to compare, as it’s generally one of the more variable letters:

Variability of จ (jo jaan) between newspaper typefaces. Is one of these more ‘standard’ than the others? L to R: DB Thai Text, Thongterm, PSL Text, DB Fongnam, TH Sarabun, DB Nation and MN ForSor.

This illustrates a nice contrast to Latin, where differences between text typefaces are more due to the styling — the modulation, the terminals, for example — rather than the forms. Thai has freer ideas about letterforms, and many letters have this kind of variability. Of course there are Latin designs where the tail of the /g/ has a different construction, but it’s the exception rather than the rule, it’s a bit too funky in text, and it’s probably the only letter that’s open to interpretation. Imagine slanting just the stem of an /a/, using a blackletter-shaped /k/ (

In my previous post, I discussed the perception of looped and loopless styles, and came to some sort of conclusion that it’s best to see them as equally valid as cultural artefacts. I’d like to move the discussion on from Latinisation for a few reasons: 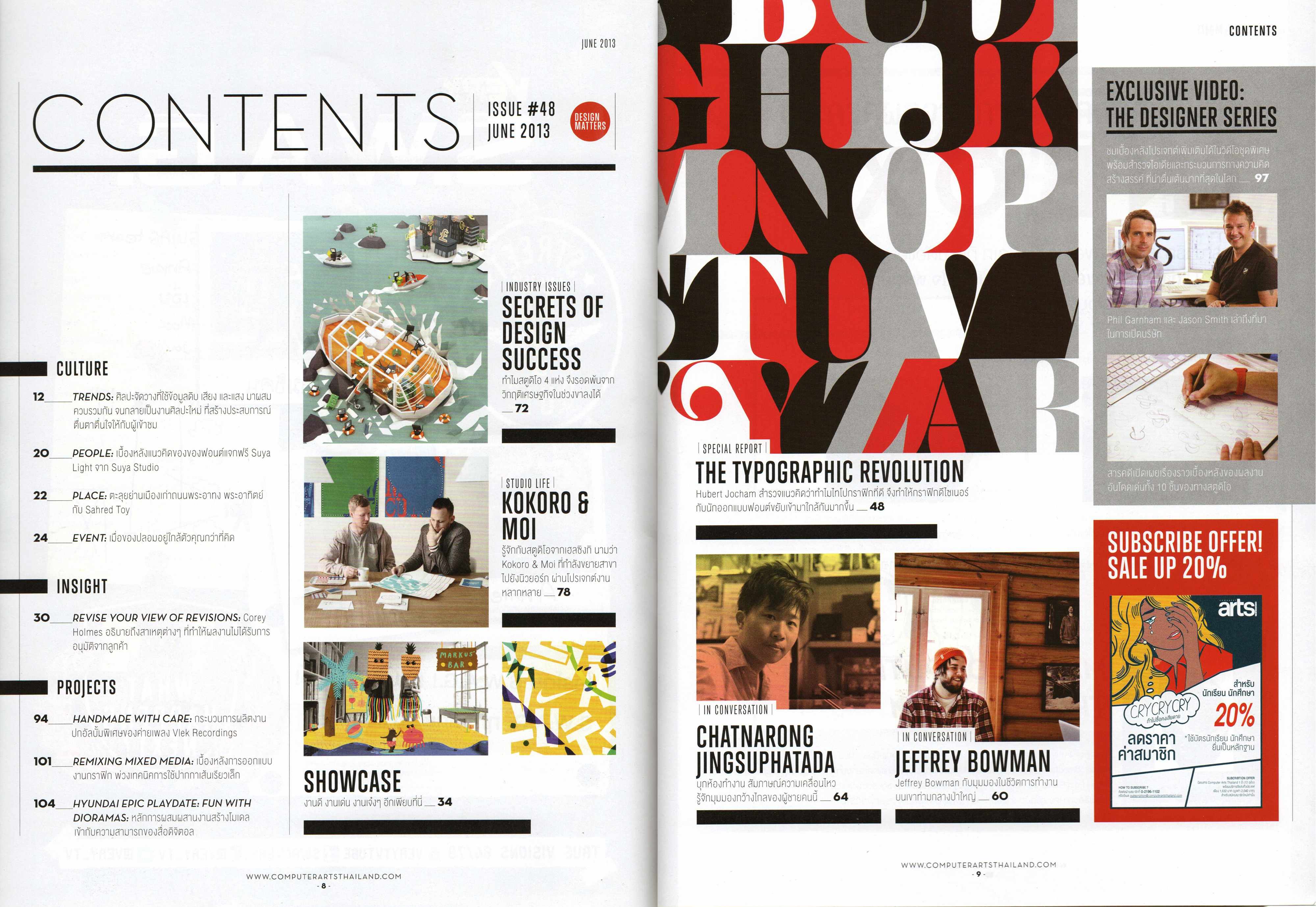 Here’s a spread from the Thailand edition of Computer Arts magazine. The striking thing here is the use of English for all titles. Neutraface is used for page titling and the subheads are set in Trump Gothic. If the Thai font, Helvethaica, looks familiar, it’s because we just saw its bold on the pages of the ASEAN+ supplement above. This recycling of typefaces demonstrates the lack of choice editors and typographers in Thailand are faced with. It may also be a factor in why they choose to use Latin type for headings: the greater choice of Latin typefaces brings a more nuanced, more unique identity, good for strengthening the branding. 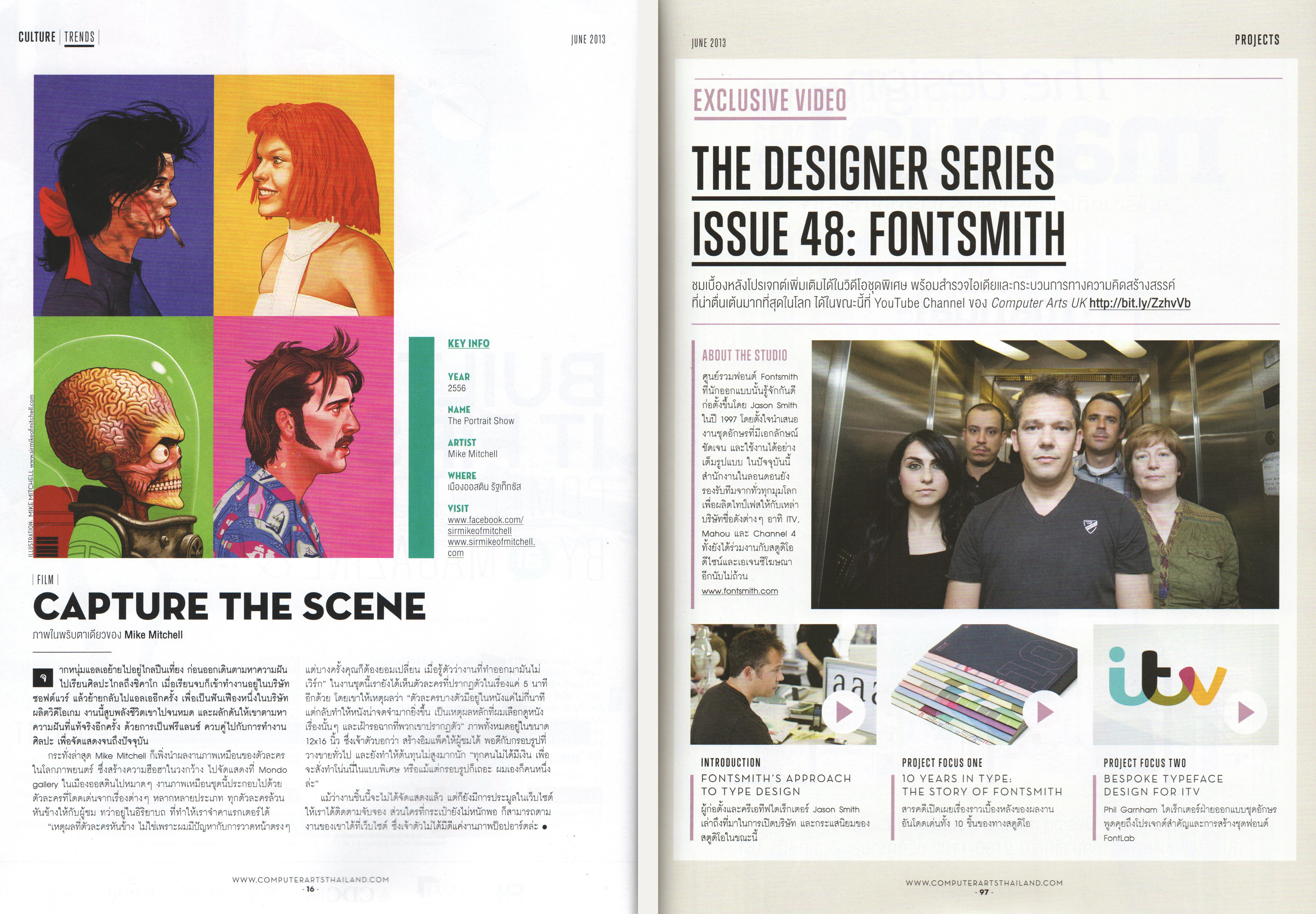 Body text is set in yet another monoline, looped typeface, this time DB Fongnam. It feels fresher than the newspaper text fonts, a little more contemporary and friendlier. The bold has just enough contrast with the regular to signal a distinction, without getting cloggy, and the lightness of the regular works well. The typography is let down by Fongnam’s Latin characters, which are on the small side and have strange proportions:

DB Fongman Latin. Not the worst imaginable Latin companion characters, but they illustrate a widespread tendency among Thai type designers to misjudge proportions. Descenders are too long (especially the /g/), /t/ is too tall, with a crossbar that’s a bit too prominent, /f/ is too short, diagonals are a bit wide, /w/ is unbalanced, tittles on /i/ and /j/ are too low.

For a magazine talking about design and typography, a unified type system would have been a good choice.

The editors of Wallpaper* Thailand have a much clearer idea about their typographic system, and last year commissioned a Thai typeface as part of the Darby family they use for text: 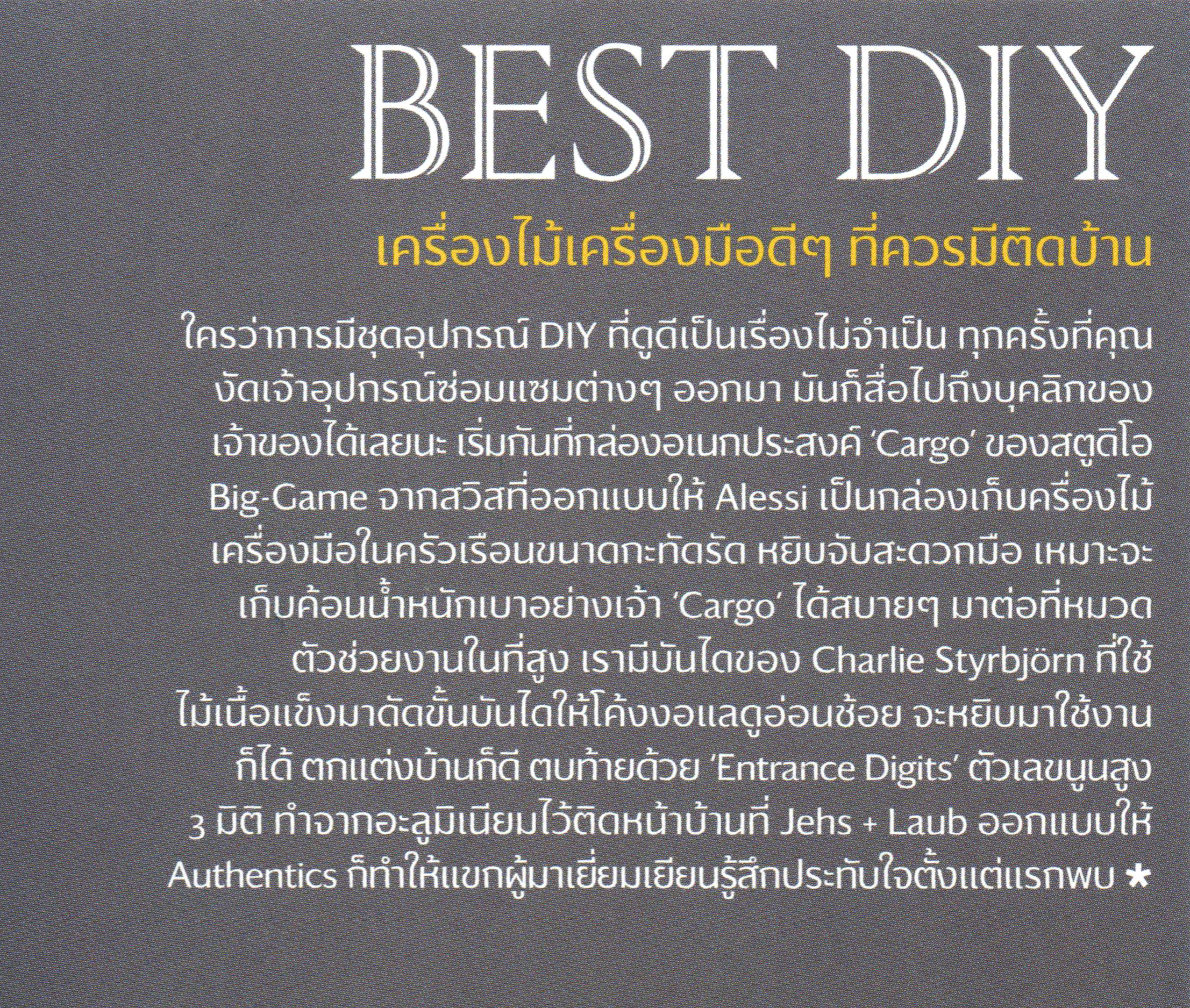 Though some people will problematise the similarities with Latin, the type system is coherent, the typeface is nicely drawn, well spaced, and has the full range of weights needed by a magazine.

It seems like quite a bold move to use loopless Thai for text. That is, until we find pages like this:

Looped and loopless Thai for text in different places.

So, what exactly is happening here? At first I thought the loopless was being used only for text inset over images, but that doesn’t seem to be the case judging by the final page shown here. Instead, it seems as though the looped style is used for the main body text, for news stories and lengthy stretches of paragraph text. That final page is not one story; though it can be read continuously, it has multiple entry points signalling the reader to pick out whichever paragraph relates to their interests.

By using a (nother) light, monoline, looped design — this time, Thongterm — for the longer stretches of body text (anything longer than a page), the editors are being quite smart. They’re acknowledging the validity of both styles, but they’re aware that the looped style is what a lot of readers are used to, and not forcing them to read loopless. The two styles give editors different tones on the page, with the looped doing the hard work with the main content, and the loopless adding a contemporary feel and doing the branding work. It’s interesting to wonder if other magazines are doing similar things, and whether this will become a trend that slowly replaces all looped text with loopless, or whether they will continue to be used side by side.