Tham (Thai: อักษรธรรม; Lao: ອັກສອນທັມ; Pali: thamma; Sanskrit: dharma) is a family of scripts derived from Old Mon around the beginning of the 14th century, used originally for Buddhist purposes in monasteries. This is the Lao variant, still in use by the sangha (monkhood) today. Talipot (Corypha umbraculifera) or Palmyra palms (Borassus flabellifer) were traditionally grown in monastery grounds to provide leaves, which were dried, treated and pressed to form a writing substrate. Text is scratched into the surface of the leaf with a sharp metal stylus and then rubbed with soot to colour the scratches.

That Pathum (That Makmo, the Watermelon Stupa), a Sinhalese-style chedi in Luang Prabang, surrounded by Palmyra palms, cultivated for their leaves.

Typographically, the manuscript’s content has a flat structure with no hierarchy, sections or titles, simply running linearly and utilising as many leaves are necessary for the length of text. Letters in the left margin are for pagination; the top leaf seems to have some sort of footnote, correction or addition in the right margin (strangely, this text is upside-down). Holes bored through every leaf allow string or pegs to keep the pages together in order, and text is written running around the holes with some breathing room. (Supplementary, smaller holes have been poked through the text itself later, to allow the leaves to be transferred to a case of different dimensions.)

This is a fairly typical example of a palm-leaf manuscript, written purely as a functional text and with no kind of special ornamentation. Characters are fairly large (a normal writing size) and show the kind of variation in form that would result from a normal writing speed (i.e. not written carefully with consistency of form across all instances of a letter). Leaves are trimmed to rectangles, rather than left with the bowed edges sometimes seen in more important manuscripts. In some patches, we can see show-through, and in some places the soot has spread along the grain of the leaves slightly, fuzzing the letters. Both these imperfections could be the result of poor drying, preparation or storage of the palm leaves. 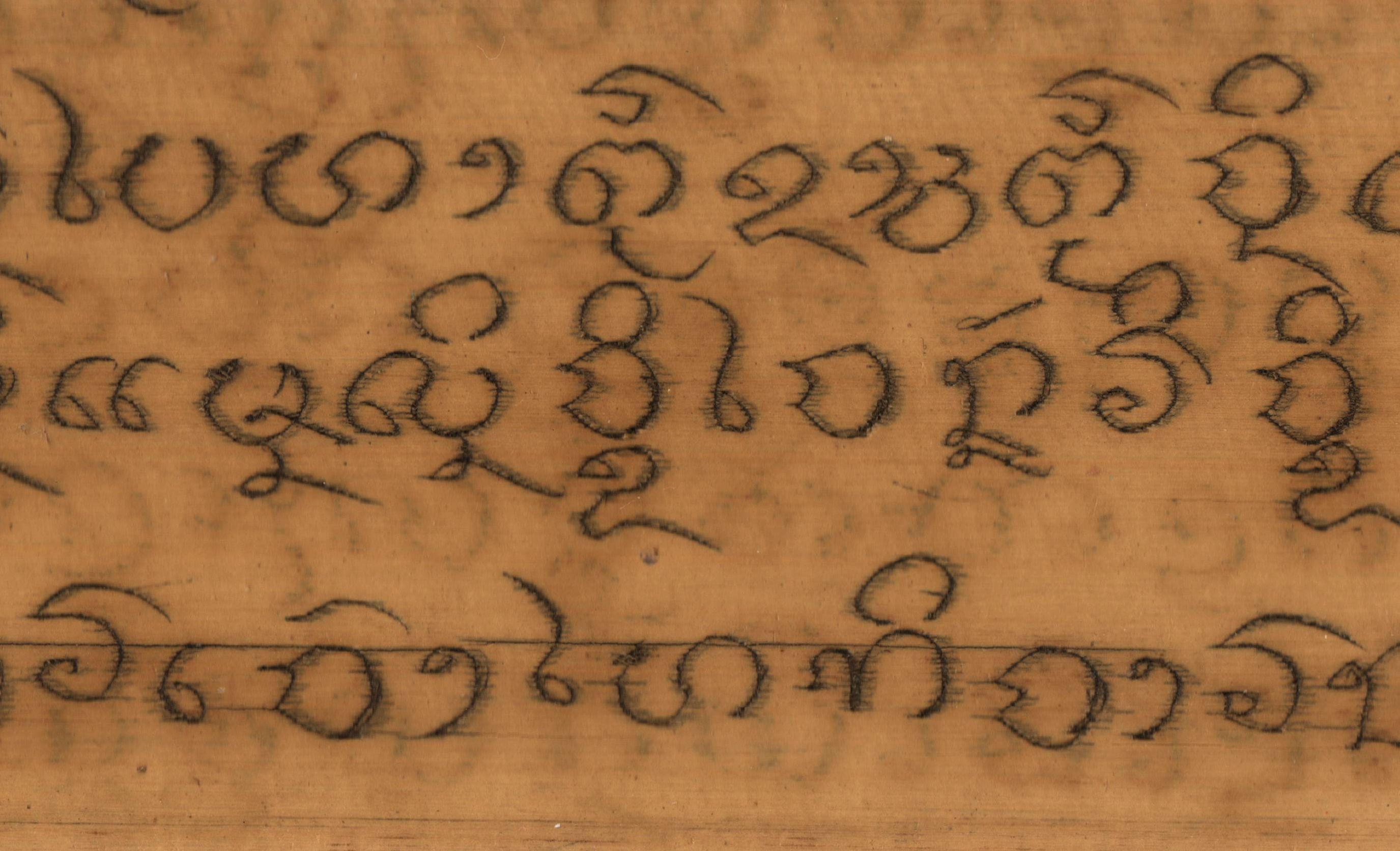 Having historically not been a secular script, Tham has not undergone the reforms evident in modern central Thai or Lao. Notable features of Tham script include an absence of word spaces, stacked consonant conjuncts, ligatures, contextual forms and fairly rounded shapes suitable for writing on the striated texture of the palm leaves (the thin leaves are especially vulnerable to horizontal strokes, which can cause tearing along the grain). Subjoined consonants may also appear not just in consonant clusters, but also below vowel letters to represent syllable-final consonants. Tham Lao is also said1DLLM Resources: Languages and Scripts, Bibliothèque Nationale, Vientiane. to employ independent vowel letters (not just combining, dependent vowel signs and diacritics), though I have been unable to substantiate this. These features give Tham Lao a striking resemblance to Burmese or Tham Lanna, though many of the letterforms are disparate. 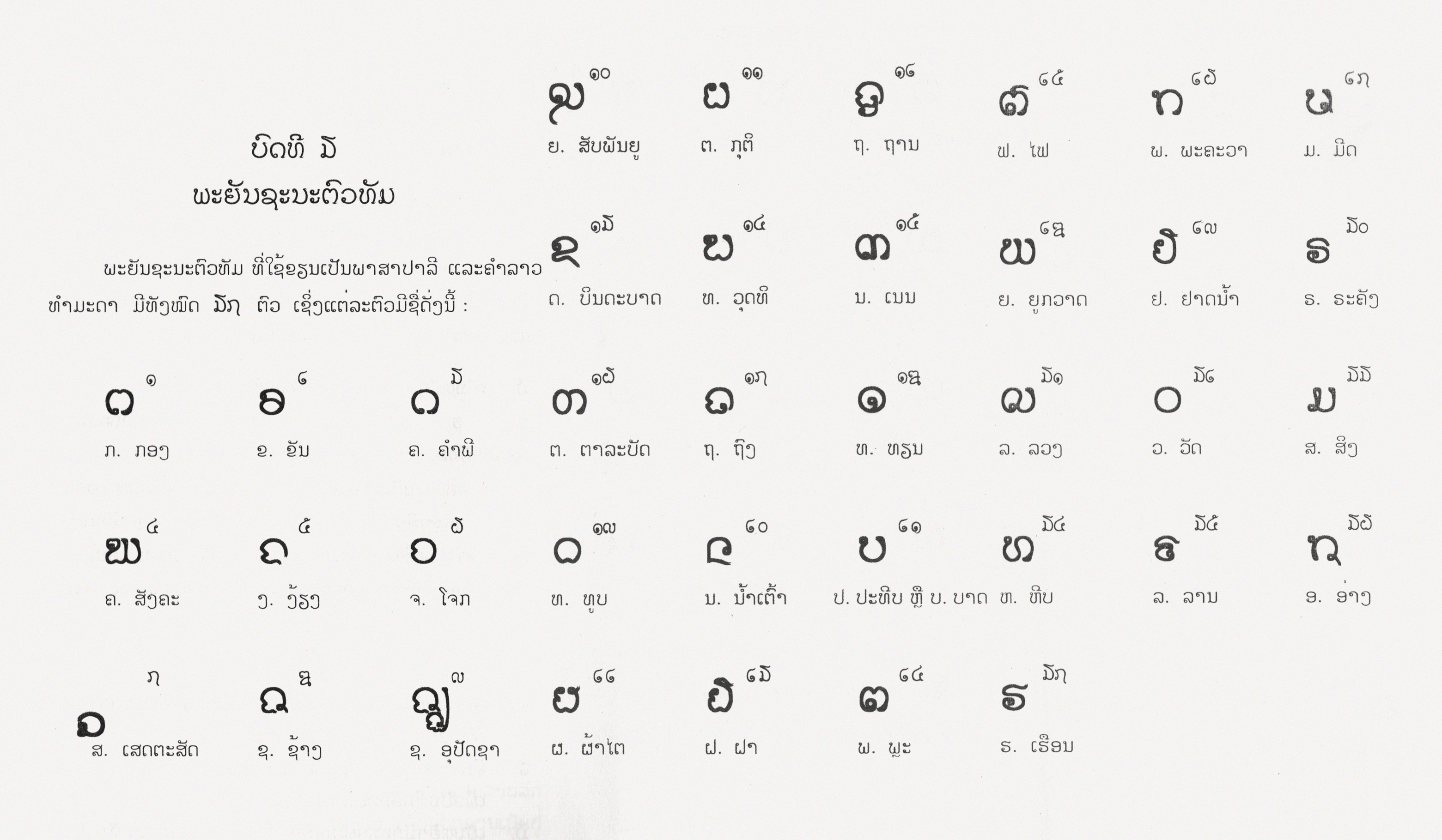